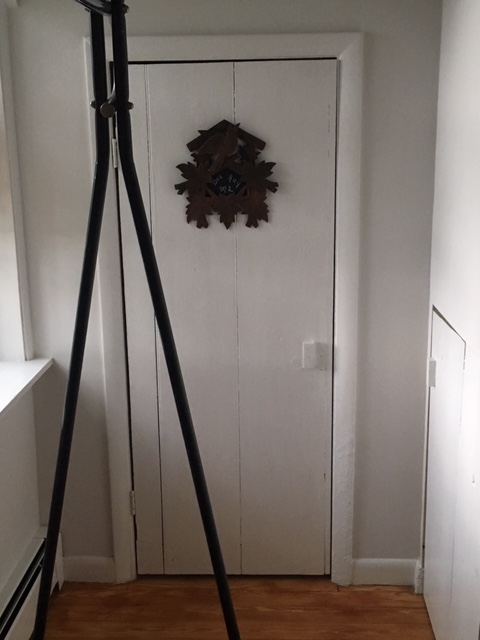 There’s something special about old houses, whether it’s the nooks and crannies hidden beneath the stairs, the familiar sound of one’s tread on the floor, or a gigantic, flowering lilac bush, encroaching upon a porch with a swing where you sit in the summer time, drinking iced tea from a tumbler.

But the first old house I lived in was in West Point, NY, when I was a little girl, and my fondest memories of it are in winter.

Often I’d be curled up with a favorite book (I re-read the Chronicles of Narnia so many times, the books to my set cracked apart into separate chunks) and looking out the giant expanse of windows in the “sun” room, praying for snow.

Yes, I loved snow, and I prayed for it, because we lived in a valley often neglected for the peaks of the mountains in which it sat, peaks frequently graced and made resplendent in white.

But sometimes God complied with a little girl’s wish, and granted not just the black mountain bear or fox but me as well, some snow in which to play.

I haven’t thought of that old house as much, or been reminded of it as much as I have been since I’ve moved into my own little cottage, which is over a hundred years old.

Yes, it will be the oddest thing, not just the colonial structure of the current home, which reminds me of the one in my childhood, but the heaviness of a door, or the unusual twist in a cellar passage way. And it won’t be so much the public history, but the remembered, intuited, or imagined stories, that will kind of belong to a place, which has become a sacred sanctuary – set apart from the rest of the world.

So the other day at the cottage, after a snow storm in the present, I was walking my dogs, and the way the snow had accumulated upon the large evergreen bushes running alongside the house, had created a fluffy, white stretch of roof top (with meandering open spaces and tunnels beneath) which the dogs wanted to explore. This gave me a familiar, excited feeling, as if I was a child again. 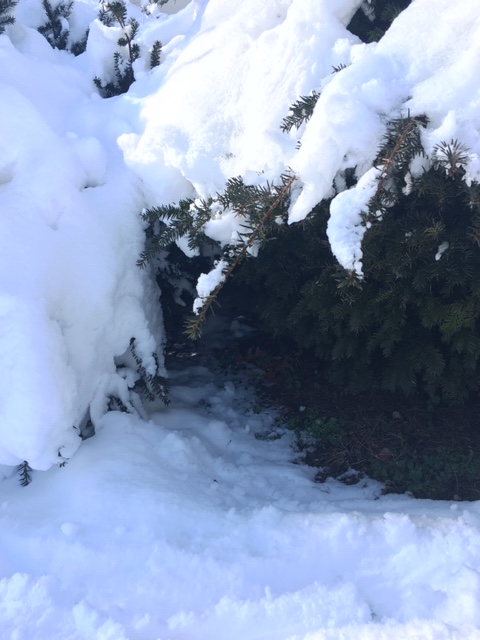 It’s always the simplest things – the beauty of nature, the noticed patterns and symbolism that take me back home, or make me realize, with a spirit of gratitude, that I am home.

Suddenly I recalled playing with a childhood friend that I may not have remembered much, or even ever again, if not for this sudden rush of nostalgia, and the reminder of snow tunnels beneath shrubbery, having explored similar ones with this playmate, outside that old house I used to call home at West Point, NY.

Those were days of great joy, and I don’t recall wondering once, if my all-providing father fretted over the inevitable problems that must have been associated with older homes, of which this military housing consisted.

Back then, I didn’t see the elongated windows of the sunroom through which I manifested snow as “drafty”, and outside I didn’t see overgrown shrubbery, needing to be cut down come spring,  to regimented standard.

I just saw marvelous long, drippy icicles, bedecking windows and rooflines like garland, and mysterious igloo-type tunnels in which I could hide, beneath gnarled, ancient shrubbery so old – it created a sense of mystery. I saw outside-rooms created out of nature in which we could play house, or secret passage way, or create a story of our own making to which mother nature had already provided the fodder.

Who notices the most important things, adults or children, I wonder?

And when we find ourselves noticing odd or shall I say – pausing for beautifully mysterious things – in adulthood, or noticing how the present can be like a teaching echo of the past, is it then that we have really come of age, and read the patterns of our life correctly?

For I do not think it just coincidence that in a time when I am more healed or at peace, having given my own need for home and sanctuary precedence, that I recall a time in my childhood in which I had a father who took care of draft and danger, leaving me free to explore and create, while never leaving the perimeters of a safe haven.

For is God not a God who does just the same, as my father did then?

And is this world not just like a very old house?

Designed to make us recall, our even more permanent, and infinitely magical, home in heaven?

“Sometimes, you have to look back in order to understand the things that lie ahead.” Yvonne Wood